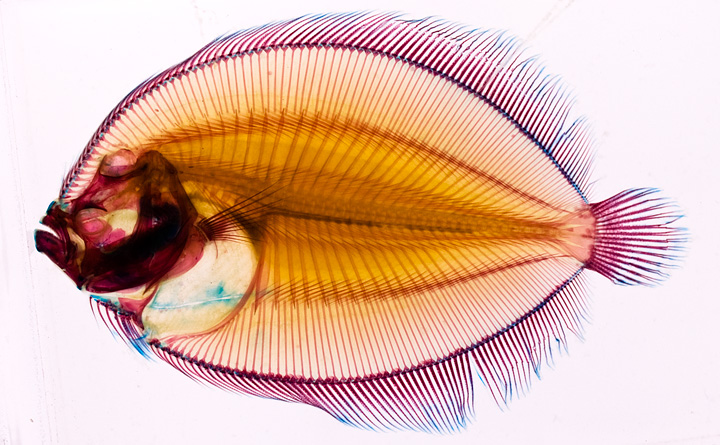 An Excerpt from Your Inner Fish: A Journey Into the 3.5 Billion-Year History of the Human Body, by Neil Shubin

We are a package of about two trillion cells assembled in a very precise way. Our bodies exist in three dimensions, with our cells and organs in their proper places. The head is on top. The spinal cord is toward our back. Our guts are on the belly side. Our arms and legs are to the sides. This basic architecture distinguishes us from primitive creatures organized as clumps or disks of cells.

The same design is also an important part of the bodies of other creatures. Like us, fish, lizards, and cows have bodies that are symmetrical with a front/back, top/bottom, and left/right. Their front ends (corresponding to the top of an upright human) all have heads, with sense organs and brains inside. They have a spinal cord that runs the length of the body along the back. Also like us, they have an anus, which is at the opposite end of their bodies from the mouth. The head is on the forward end, in the direction they typically swim or walk. As you can imagine, “anus-forward” wouldn’t work very well in most settings, particularly aquatic ones. Social situations would be a problem, too.

It is more difficult to find our basic design in really primitive animals—jellyfish, for example. Jellyfish have a different kind of body plan: their cells are organized into disks that have a top and bottom. Lacking a front and back, a head and tail, and a left and right, jellyfish body organization appears very different from our own. Don’t even bother trying to compare your body plan with a sponge. You could try, but the mere fact that you were trying would reveal something more psychiatric than anatomical.

To properly compare ourselves with these primitive animals, we need some tools. Just as with heads and limbs, our history is written within our development from egg to adult. Embryos hold the clues to some of the profound mysteries of life…

… In the 1800’s, some natural philosophers looked to embryos to try to find the common plan for life on earth. Paramount among these observers was Karl Ernst von Baer. Born to a noble family, he initially trained to be a physician. His academic mentor suggested that he study chicken development and try to understand how chicken organs developed.

Unfortunately, von Baer could not afford incubators to work on chickens, nor could he afford many eggs. This was not very promising. Lucky for him, he had an affluent friend, Christian Pander, who could afford to do the experiments. As they looked at embryos, they found something fundamental: all organs in the chicken can be traced to one of three layers of tissue in the developing embryo. These three layers became known as the germ layers. They achieved almost legendary status, which they retain even to this day.

Pander’s three layers gave bon Baer the means to ask important questions. Do all animals share this pattern? Are the hearts, lungs, and muscles of all animals derived from these layers? And, importantly, do the same layers develop into the same organs in different species?

Von Baer compared the three layers of Pander’s chicken embryos with everything else he could get his hands on: fish, reptiles, and mammals. Yes, every animal organ originated in one of these three layers. Significantly, the three layers formed the same structures in every species. Every heart of every species formed from the same layer. Another layer gave rise to every brain of every animal. And so on. No matter how different the species look as adults, as tiny embryos they all go through the same stages of development.

To fully appreciate the importance of this, we need to look again at our first three weeks after conception. At the moment of fertilization, major changes happen inside the egg—the genetic material of the sperm and egg fuses and the egg begins to divide. Ultimately, the cells form a ball. In humans, over about fide days, the single-cell body divides four times, to produce a ball of sixteen cells. This ball of cells, known as a blastocyst, resembles a fluid-filled balloon. A thin spherical wall of cells surrounds some fluid in the center. At this “blastocyst stage” there still does not appear to be any body plan—there is no front and back, and certainly there are not yet any different organs or tissues. On about the sixth day after conception, the ball of cells attaches to its mother’s uterus and begins the process of connecting to it so that mother and embryo can join bloodstreams. There is still no evidence of the body plan. It is a far cry from this ball of cells to anything that you’d recognize as any mammal, reptile, or fish, much less a human.

If we are lucky, our ball of cells has implanted in our mother’s uterus… Around the beginning of our second week after conception, the blastocyst has implanted, with one part of the ball embedded in the wall of the uterus, and the other free. Think of a balloon pushed into a wall: this flattened disk becomes the human embryo. Our entire body forms from only the top part of this ball, the part that is mushed into the wall. The part of the blastocyst below the disk covers the yolk. At this stage of development, we look like a Frisbee, a simple two-layered disk.

How does this oval Frisbee end up with von Baer’s three germ layers and go on to look anything like a human? First, cells divide and move, causing tissues to fold in on themselves. Eventually, as tissues move and fold, we become a tube with a folded swelling at the head end and another at the tail. If we were to cut ourselves in half right about now, we would find a tube within a tube. The outer tube would be our body wall, the inner tube our eventual digestive tract. A space, the future body cavity, separates the two tubes. This tube-within-a-tube structure stays with us our entire lives. The gut tube gets more complicated, with a big sac for a stomach and long intestinal twists and turns. The outer tube is complicated by hair, skin, ribs, and limbs that push out. But the basic plan persists. We may be more complicated that we were at twenty-one days after conception, but we are still a tube within a tube, and all of our organs derive from one of the three layers of tissue that appeared in our second week after conception.

The names of these three all-important layers are derived from their position: the outer layer is called ectoderm, the inner layer endoderm, and the middle layer mesoderm. Ectoderm forms much of the outer part of the body (the skin) and the nervous system. Endoderm, the inside layer, forms many of the inner structures of the body, including our digestive tract and numerous glands associated with it. The middle layer, the mesoderm, forms tissue in between the guts and skin, including much of our skeleton and our muscles. Whether the body belongs to a salmon, a chicken, a frog or a mouse, all of its organs are formed by the endoderm, ectoderm, and mesoderm.

Von Baer saw how embryos reveal fundamental patterns of life. He contrasted two kinds of features that vary from species to species. Features such as the tube-within-a-tube arrangement are shared by all animals with a backbone: fish, amphibians, reptiles, birds, and mammals. These common features appear relatively early in development. The features that distinguish us—bigger brains in humans, shells on turtles, feathers on birds—arise relatively later…

… All of these comparisons lead us to the real issue at stake. How does the embryo “know” to develop a head at the front end and an anus at the back? What mechanisms drive development and make cells and tissues able to form bodies?

Neil Shubin is provost of The Field Museum as well as a professor of anatomy at the University of Chicago, where he also serves as an associate dean. Educated at Columbia, Harvard, and the University of California at Berkeley, he is the author of Your Inner Fish and The Universe Within.

*All of the excerpts on my blog are from books that have stayed with me for some reason—because the concept was awe inspiring, changed how I view the world, was beautifully expressed, or all three. ‎I personally curate all of the book excerpts, and I always obtain the author’s final approval before posting their work on my blog.