An Excerpt From The Canon, By Natalie Angier

Early in the evolution of the solar system, wild swarms of comets were drawn in from the exurbs by the highly credible gravitational pull of Jupiter, the giant of the planetary litter. A sizable number of those comets either forgot to bring their portable GPS device, or found it wasn’t working because it hadn’t been invented yet, but in any case they ended up overshooting their target by a few hundred million miles and crashing into Earth instead. Earth was still young, and so hot to the touch that much of the cometary water rapidly vaporized back into space; but some seeped into the depths of the young Earth, where it was bound up into the rock, greatly amplifying whatever water stores our world had from the start. Beginning about 4 billion years ago, volcano eruptions steadily loosened the subterranean water from its mineral crypt and spewed it back out as steam, but to a planetary surface grown clement enough for the water to rally its forces, seize the initiative, and initiate the seas. Earth’s crust had cooled down, and the swirling molten iron at its core had begun generating the magnetic fields that help deflect the searing solar wind. So shielded, the vast clouds of volcanic reflux were not peeled off into space, but instead hovered above the ground, gathering and glowering portentously, as storm clouds do. They gathered until there was no room for more. The skies were supersaturated out to the limits of gravity’s grip, in a nimbus of high humidity, and the water vapor had no choice but to condense out and fall to Earth as rain. The rains fell in relentless torrents of Noachian proportions, only bigger and longer, and there were no giraffes and zebras huddled on a wood boat, wishing they were back at the circus. For tens of thousands, hundreds of thousands of years, the antediluvian deluge fell, filling the dimples in Earth’s newly caramelized skin, filling them to the brim. Yet while this downpour may sound like an excessive rainy season, even for Seattle, by the timetable of Earth’s history the building of our naval resources barely lasted a sneeze. “The geological record of sedimentary rocks, formed in the presence of liquid water,” the geologist Robert Kandel has written, “proves that the oceans have existed for three billion years, maybe even four,” and at a volume pretty much like what we have today. In other words, no sooner had Earth’s crust managed to cool enough for discernible depressions to form than the skies had deposited in them the maximum allowable in liquid assets, our storied galleons of 326 million trillion gallons, enough water to fill a string of bathtubs that would reach from here to the sun and back again 5 million times…

…Earth and its life are much bigger the we, and they’ll carry on whether we do or not. Maybe we need to get away from it all, take the ultimate off-road vacation to a celestial loation. It’s time for the populist stage of the Space Age, and the family-budget space flights we’ve been expecting since NASA gave us Tang. Everybody deserves a chance to experience the great awakening that clearly comes with extraterritoriality. Astronauts have attested to it time and again, the transformative moment when they first looked down on the oneness of bright blue marble Earth, their only home, and Earth looked back and said, I know.

Natalie Angier writes about biology for the New York Times, for which she has won a Pulitzer Prize, and American Association for the Advancement of Science journalism award, and other honors. She is the author of The Beauty of the Beastly, Natural Obsessions, and Woman: An Intimate Geography. 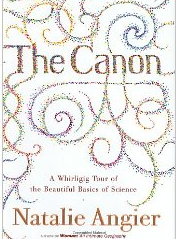 *All of the excerpts on my blog are from books that have stayed with me for some reason—because the concept was awe inspiring, changed how I view the world, was beautifully expressed, or all three. ‎I personally curate all of the book excerpts, and I always obtain the author’s final approval before posting their work on my blog.